Resilient people are usually frugal and practical. Until Christmas comes around. Christmas shows the generous and giving side of resilience.  Resilient people know they survive and thrive as a communities and families. Resilient folks are not engaged in a perpetual “survival of the fittest” fight with all other individuals.

But there is a way for the giving and frugal sides of resilient people to be reconciled. Let’s just celebrate Christmas on January 7, along with the Ukrainians and Ethiopians and other Orthodox folk.  We’ll start buying our Christmas presents about December 27 at “after Christmas” sales and take advantage of as many Christmas returns as possible. There won’t be any crowds for our shopping and everything will be dirt cheap.

We’ll be able to give twice as many gifts at half the cost. Before December 25, when everyone else is stressed out, we’ll go around exuding calm and peace.  We’ll get our Christmas tree on December 24 when the stores give away all the trees which haven’t sold.

If you are one of those who is late getting Christmas cards sent, you’ll have an extra two weeks to get it done.

Best of all, we will enjoy a Christmas which has not been commercialized as December 25 has. We’ll get back to the peace and joy which Jesus tried to bring us, but which we often miss during the hectic Christmas season. We’ll might even enjoy a sedate Orthodox service and some of the Orthodox traditions.

When you totally switch to the Orthodox way of Christmas, you will be going to church more. On Christmas Eve morning, you’ll participate in the Royal Hours.  This is a service only celebrated three times a year.

For the rest of the day, many Orthodox Christians fast.  You can drink water, but you do not eat anything at all. 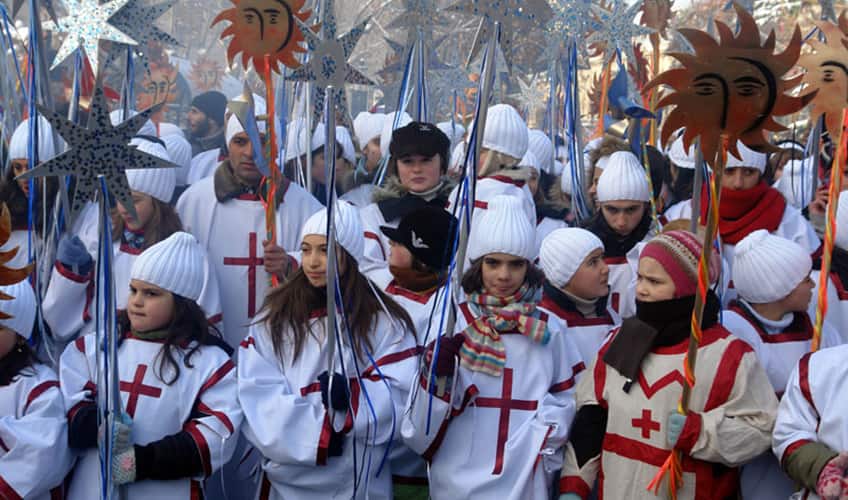 When evening comes, they enjoy a Christmas Eve “Holy Supper”, which consists of 12 dishes, one to honor each of the Twelve Apostles. A prayer service called the All-night Vigil is held after dinner.  This service includes nine sacred songs which have been combined in one symphonic piece by both Tchaikovsky and Rachmaninoff. The service is long but doesn’t really last all night.  Which is good, because you do have another service on Christmas morning.

Then the Orthodox spend Christmas day exchanging gifts, feasting, and enjoying time with family and friends. On the day following Christmas, they often return to church for another religious ceremony.

Transitioning to the new date for Christmas might be easier if you coupled it with Epiphany.  Epiphany is celebrated on January 6 and is the time when the Wise Men delivered their gifts.  So gift-giving could gradually be shifted by first giving gifts on both days and then gradually moving everything to the Orthodox Christmas.

With the days being longer and gifts being cheaper and a lot more interesting services to go to, there are lots of reasons to switch the date of Christmas.  I have to admit I have yet to convince anyone to switch.  But at least my Ukrainian and Ethiopian friends know I am on their side.