Down here in Arkansas, we don’t have much political conflict these days.  We’re all pretty much cut from the same cloth–at least in the rural areas.  We might have nine candidates for mayor, but they hardly disagree on philosophy at all. So at election time, we have to look to other states for entertainment. It was lots of fun this year to follow the silliness in Florida, Georgia and Missouri. 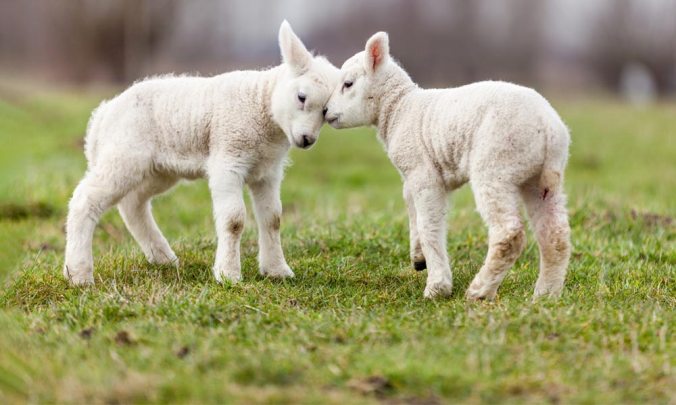 Watching election returns on TV gets old quick, especially listening to the pundits pontificate, but it was kind of fun to see so many of them using the term bellwether as the early returns came in.  They used bellwether to mean an early result which indicates a trend for the future.

I wonder if any of them knows what the term means on the farm.

Growing up on a farm, you learn how and why to castrate males at an early stage.  It makes them more docile and have better tasting meat. That’s what a wether is: a male who has been castrated

The term “wether” is a neglected Old English word referring to a castrated male sheep.  Adding the prefix “bell” to make “bellwether” denotes a specific role this neutered sheep played for both shepherds and his fellow sheep.

In order to track flocks of sheep, a bell was attached to the wether – giving rise to the term bellwether.  The reason a bell was put on the wether, rather than other sheep, was because of his status as the flock eunuch.   Bellwethers were docile and easily controlled.  Because of the ease with which they could be controlled, they were used to lead the flock, and the sound of the bell around their necks kept the sheep’s owners apprised of their location.

Because of their emasculation, bellwethers were commonly used to lead their fellow sheep to slaughter.  However, the bellwether never was killed: His skills, such as they were, proved too valuable to lose.  Thus, early sheep slaughterhouses developed a “bellwether gate,” which was used to separate the useful-idiot bellwether sheep from the rest of the flock once he had led them into the slaughterhouse’s intake chute.  The saved bellwether was introduced to a new flock and the process was repeated.

Though the pundits don’t know the real meaning of the term, it’s fun to hear them use it.  It fits so well in today’s political parlance. The goal of much of our political elite does seem to be the emasculation of the modern American male.  After all, how else to insure the politically correct docility needed to lead the electorate to the slaughter?

It’s November and the hummingbirds have left the Delta outpost for warmer climes. What we consider the best Delta weather does not suit the hummers.  Cool, dry air and the best leaf color in years does not interest them.

Hummingbirds seem so delicate and peaceful.  A gentle hum tells you they are near as they quietly hover sipping nectar from their favorite flowers. Many Delta families put out feeders and attract dozens of hummers to spend the summer.  Only when you can observe them for awhile do you discover how vicious they are.

Nothing much interests them except eating and fighting. By last weekend, only two were left. They were still fighting.  The only time they don’t fight is when there is only one of them.  I wonder if there were just one Democrat and one Republican left if they would still be fighting.

We have three feeders, but some hummers want all three for themselves and chase others away.  Only once have I seen the birds quietly feeding at all three stations. More often they are fighting with each other. Each is out for themselves. They can’t cooperate.  Live and let live is not a hummingbird philosophy.

They live much as our ancestors lived.  For most of humans’ existence on this earth, life has been brutal and short.  We fought with each other over everything. At some point we learned that cooperation and peace and respect could make life better for everyone.  Some societies learned it better than others.

Communities quit waging continual war on their neighbors and nations were built. Once differences began to be resolved through peaceful discussion and courts instead of violence, democracy and political parties arose. The parties could have different methods, but the diversity was complementary.  All were pursuing the goal of making a prosperous country.

Today we are on a downward trajectory. We have less cooperation, more antagonism and less respect every year. The peaceful, prosperous society of the 1950s in the US is gone.  In the late 50s we lived in town for a couple of years when I was in grade school.  We played outside without adult supervision, wandering the neighborhood far after dark. We walked more than a mile to school without any adults tagging along.  These safe communities had existed since Europeans settled the American continent. None of that exists today in America.

Small town America was united in those days. We all believed in America and making America better and better. We had diverse religions and ethnic groups, but all were united to make our towns, states and countries better. You knew your neighbors and you all believed in the same rules. Some of the elite got bored with the traditional society and promoted diverse sets of values and societies which often opposed mainstream American values. They found a home in universities where diverse viewpoints were welcomed. They were like the new species kudzu or multi-flora rose–first welcomed for their diversity.

But kudzu and other invasive species don’t just stay at their port of entry. They escape and invade everywhere they can.  If they aren’t controlled, they will smother all other species. Similarly, in mid 20th century America, a belief system arose that contended diversity of ethnic groups and beliefs was in itself valuable and that America was evil in trying to control or limit such groups.

As the wider society recognized that the educational elite was teaching values which undermined basic American values, some reacted and tried to protect the peaceful, homogeneous society which had served America so well for so long.  The new American elite responded by attempting to destroy the value system which had allowed them to flourish.  In the cause of diversity, American elites have destroyed past American homogeneity. In the pursuit of diversity, peace and harmony have been sacrificed.

This idol of diversity for diversity’s sake can only be worshiped by those who don’t know ecology. The diversity which is crucial to resilient ecosystems is a complementary diversity. The diverse species of resilient natural systems complement each other in pursuit of a common goal: that the system as a whole survives and thrives.  The diversity American elites push today has conflicting goals—one of which is total destruction of the system. The American educational elite is similar to an invasive species like kudzu or multiflora rose or fire ants.  They are focused solely on perpetuation of themselves and their destructive beliefs. They are focused on promoting themselves at the expense of the existing system.

The diversity introduced into our communities often wants to destroy America. The diversity is not complementary to the existing system.  It seeks to undermine everything about that system.

Ecologists warn against introduction of alien species.  Introducing diversity into an established ecosystem often destroys that ecosystem.  For the last sixty years, American elites have insisted that diversity be introduced into peaceful, harmonious communities. It’s no surprise that there is no peace and harmony in the US today.