Ever wanted to build out of stone? We’re resurrecting Stone Masonry at Meadowcreek.  We have a master stone mason visiting this week to plan a training program and a series of projects leading up to a dam/cheese cave/ water pumping station/swimming pool at our largest spring. 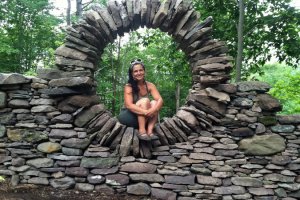 Every house at Meadowcreek is blessed with amazing stonework.  From three story fireplaces to retaining walls to patios, everywhere you look is fascinating, expert masonry.  They were built 30 years ago and are still solid as can be.

Stone masonry is hard, physically demanding work.  The mason is only interested in training strong people who will stay with it for a long time.  It’s also intellectually demanding.  The mason must visualize how each stone can fit in the structure he is planning.

Some people are good at this sort of visualization, others aren’t.  Psychologists call it spatial intelligence.  Can you rotate an object in your mind and see how it would fit with other objects?  Few people are really good at this.  On average, men are much better than women, but many women far surpass most men.  I got a good test of my spatial intelligence yesterday when I had to change a belt on the drier with only a picture of how its should look from the back.  I had to work from the front without being able to see it.

The Chinese word for this concept is shi.  Shi doesn’t have an exact definition in English, but it means something like “a potential born of disposition.”  It also is a very dynamic concept.  Shi doesn’t refer to a static potential, but a potential which changes as circumstances change.

The stone mason coming to Meadowcreek this week will be looking for this potential, this shi, in the people he meets.  I hope there are enough which meet muster.

Jared Diamond’s book Collapse gives some cogent examples of this.  My favorite is the collapse of the Scandinavian settlers on Greenland.  As the climate got cooler, they clung to the grass and sheep and other traditions of warmer regions and died out.  Their Inuit neighbors harvested the bounty of the Northern sea and survived.

What Diamond doesn’t point out is that the Scandinavians proved more adaptable in the long run.  After mastering fishing the cold waters, they eventually came back to create a country in Greenland which both preserves old traditions and incorporates needed adaptations.

Democrats and Republicans in the US both seem like the dying first settlers in Greenland.  The Republicans often seem stuck in the 1950s attempting to maintain a system which worked then.  Democrats are often wedded to a model from the 1960s which is equally not adapted to today.

It may seem strange to illustrate a concept rooted in change with an unchanging rock wall.  Well-built rock walls don’t change, unlike most systems we deal with. Maybe that’s their attraction.

But their resilience is only due to the mason’s ability to see the stones which can interact to make the wall strong and resistant to change.